I’ll admit to a certain amount of shame that it’s taken me this long to try out the Beta Java™ 9 support in Eclipse. It’s a work-in-progress, but certainly shows that progress is being made.

Here’s what I did.

I downloaded the early access version of Java 9 JDK from java.net in the form of a tar.gz file that I decompressed into a local directory: /home/apps/jdk1.9.0. I made no other changes to my system.

I downloaded the Eclipse SDK 4.6 (Neon) M2 from the Eclipse Platform downloads and decompressed it into its own directory. I made a small change to the eclipse.ini file to make the new configuration run using the Java 9 runtime.

Note that this change occurs before the -vmargs line.

I launched Eclipse and opened the p2 installer using the Help > Install new software... menu option. I pointed the p2 installer at the Java 9 Beta software site http://download.eclipse.org/eclipse/updates/4.6-P-builds/ and installed both features (one is the feature and the other is the corresponding source code). 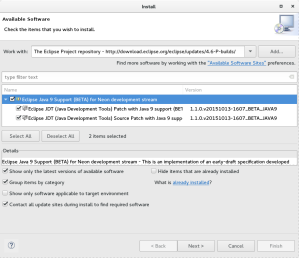 From there, I created a very simple “Hello world” application (using the JavaSE-1.9 Execution Environment), saved, and ran. It worked exactly as expected. There was much rejoicing (Perri brought brownies).

Next step: tinkering with Java 9.

If you’d like to see the Java 9 support in action, visit the Eclipse Foundation booth at JavaOne next week. Or better yet, drop by the Hackathon at EclipseCon Europe the following week and connect directly with committers from the development team.

Update: I had mistakenly titled this “Mars”. Eclipse Mars does run on JDK 9, but to actually build Java 9 applications, you need to start from Neon. Note also that these instructions apply for both the JDK 9 EA and the JDK 9 EA with Jigsaw.

This entry was posted in Eclipse 101, Java and tagged java 9. Bookmark the permalink.